Perfect dimensions for a 5" dust hose for my dust collection system. Screws leave enough clearance for weather stripping to create an airtight seal. Hard to find a 5" duct flange, even at woodworking stores. 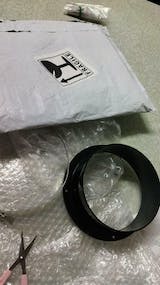 Good quality plastic... Good price.
It serves its purpose. I am happy with it.

I decided to try to make some (feral) cat shelters out of used coolers. I bought the 4" and 5 " covers to line the entry/ exit hole. I needed a 6" too, but decided to try something else for the 6" hole. The 4" was really too small for the cats and did not end up using it. I wanted the tube to stick out to help create a bit of a rain barrier. The red Igloo cooler was so thick that the tube was almost flush with the wall, so it didn't matter which way it was installed. I installed it with the flange on the outside to cover the unsightly, rough edges of the hole. The blue Coleman cooler was thin enough to get the tube to stick out a bit. I was hoping this would be a nice tight fit, but it was pretty loose. I didn't want the ugly look of duct tape. I tried some electrical tape around the rim, but it didn't stick. Someone had recommended using calk to seal the hole, but one of the instructional videos said their cats don't like the smell of the calk and won't use the shelters. I really like that this had the screw holes, and I didn't have to worry about messy calk. Low price and screw holes were great for my project. 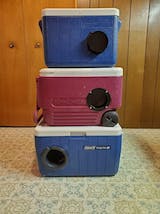 Bought these to encase my exhaust fan. The fan looks like a copus blower (tube-like), so this made building a box even easier to connect the hoses to

I am using this to move warm air from a wood stove in the basement to in-floor air registers left over from a previous heating system. I built a baffle for each duct mounted in the basement ceiling above the stove and attached a 6-inch fan to one side of the baffle and one of these connectors to the back. The other end of the duct connects to the rigid duct that goes to the floor register. Once in place i get a nice steady flow of warm air into the living space on the main floor. This connector plus a 6-8-inch ring clamp cleanly attaches the flexible duct. It's a little fiddly to get on, more about how the duct is made than the connector. Stretch out the duct and it slides right over the connector, tighten the clamp and it stays in place.